KEYNES & KEARNS: AM I A LIBERAL?

This new publication contains a timely republication of John Maynard Keynes’s Am I a Liberal? alongside a new companion essay by Ian Kearns, the new director of Social Liberal Forum 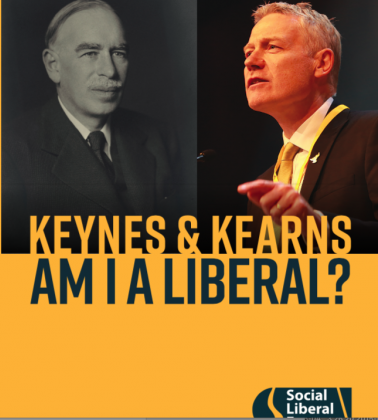 Keynes and Kearns: Am I a Liberal?

This new publication contains a timely republication of John Maynard Keynes’s Am I a Liberal?, alongside a new companion essay by Ian Kearns, a former director of the IPPR who recently joined the Lib Dems from Labour, asking that same question.

Keynes’s original essay prompted a serious assessment as to what liberalism means in the modern world – he argued that remaining Gladstonian shibboleths such as Free Trade and Temperance were not, in themselves, enough to sustain a mass ideology. Instead, he proposed five new dimensions that any Liberal should apply themselves to:

The essay remains ahead of its time in many of its conclusions, and its vindication can be found in the number of ardent Liberal converts over the years, recruited on these very issues. Despite some sections being somewhat dated, the essay is original, and buzzing with ideas; and it is well worth a read, 96 years on, for the sometimes-uncomfortable questions it raises.

Kearns’s essay is a more personal one, following on from some of Keynes’s themes – especially the passages excised from the original version of Keynes’s paper, as delivered at the 1925 Liberal Summer School. Kearns looks at much at other ideologies and, while he has nothing positive to say about conservatism, he focuses his real fire on the modern Labour party, and its shortcomings as a vehicle for radical thought or action.

More broadly, this is a revisiting of that great political tool, the pamphlet. Ideas matter in politics, and their importance should not purely be measured in policy terms. This publication marks a return to the medium of the short essay which is vital to hammering out, communicating and refining well-thought-out ideas.

A review of this publication by Dr Seth Thévoz, an academic historian, can be found on Lib Dem Voice.