Debt and Security - A social liberal response to the spending review

The central claim of the Chancellor’s much-anticipated spending review was that it would deliver economic security.  Much of the debate since those opening remarks has focussed on his u-turn over tax credit changes, and on the dire response by John McDonnell that saw Mao's Little Red Book racing towards an increasingly amused George Osborne.

It is that central claim, though, which is of the greatest interest to liberals - that in Osborne's view, the key to achieving economic security for a country lies in having not even a balanced budget, but in fact a surplus; a rare event for the UK economy since the 1980s.  That surplus, he argues, provides for a buffer against the inevitable day on which the UK economy enters recession once more.  The problem with this argument is that there's increasing evidence that the resilience of an economy owes less to public debt than it does to private debt.

For economic security to be a meaningful notion, it must relate to the capacity for a country to weather an economic downturn, and for it to sustain the longest periods of economic growth.  The duration of a recession, the chance of a recession occurring, and the depth of a recession, all form the basis for the economic security of a nation. For Osborne's arguments to remain coherent, it must be his position that a surplus aids in some or all of those three aspects.

The first claim made over the last five years, both during coalition and now whilst governing alone, is that the economy is made inherently stronger if public spending is constrained and if high levels of public debt can be avoided.

The problem with that claim is that the evidence appears to show that an economy can be made weaker with the state improving its finances at the expense of its citizens.  As consumers move into debt, either to finance large costs or simply because their disposable income no longer allows them to meet all their needs, household debt rises to dangerous levels that the OECD associates with an increased risk of recession. 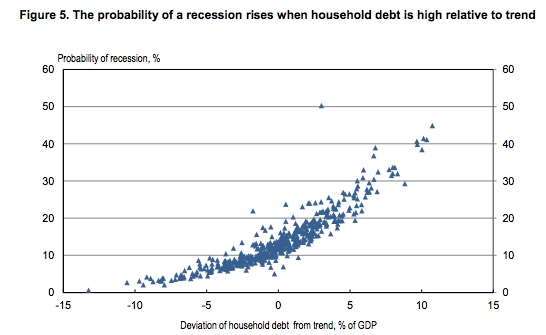 Not only are recessions associated with increased levels of household debt but when those recessions occur they tend to be more severe - lasting longer and being deeper. 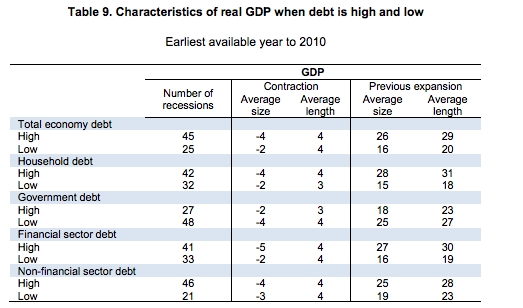 real GDP when debt is high vs low - source OECD

Indeed high government debt seems to offer little guide as to whether a recession will occur and low government debt may be an indication that the economy is being insufficiently supported during a downturn, leading to a worsened outlook for the recovery.

Of note in this respect is that levels of household debt in the UK have risen in recent years after a period in which the recession drove people to save - paying down the large level of household debt that had previously accumulated.  It's this need to deal with debt during a time of diminished income that helps make a high-debt recession last longer and be more severe.

The worrying aspect about UK household debt once again rising is that it comes at a time when incomes have not increased - the latest ONS blue book data shows households becoming net borrowers again at a level not seen since before the financial crash.

With that development in mind, the Bank of England recently looked at the question of household spending, debt, and the severity of recession.  They concluded that higher levels have been associated with both deeper and longer recessions.

In part, this is due to the urgent need for people facing reduced incomes, or anticipating such, to service debts at the expense of other consumption, and in part it is also due to high levels of debt being so widespread that many households seek to scale back their spending at the same time - a development that only serves to further suppress income.

It was against this backdrop that the original Keynesian call-to-arms was issued over the recession; that the government should act to stimulate demand to shorten the duration of the recession in an environment where spending had dropped off sharply.  That call was not heeded, and for the first two years of the coalition the economy bumped along the ground - lost years and lost time which are still having an impact today.

The most controversial aspect of the Chancellor's plans was the much-derided change to tax credits.  These plans would have seen thousands of pounds in annual income removed from some of the lowest earners in society and, quite rightly, that change was criticised as immoral, cruel, and unfair to many millions of voters who, thanks to a lacklustre General Election campaign, had heard little of Tory plans.

What the move also was, however, was an attack on the very economic security that the Chancellor championed during his review.  For the reasons outlined above, removing yet more disposable income from people already in a precarious economic situation does nothing to help secure the economy against recession; on the contrary, it creates an environment where families must turn to short term loans, either through credit cards or payday lenders, simply to make ends meet.  Under those circumstances they are likely to have few or no savings, and when - as it will - the next economic shock hits, they will be poorly placed to withstand it.

It is difficult even to welcome the Chancellor's u-turn - a move he felt 'able' to make only in terms of the room for manoeuvre afforded to him by the Office for Budgetary Responsibility.  This ignores in part that many of the constraints that supposedly sit upon the Treasury are self-imposed and (as the about-face on tax credits shows) ideological in nature.  It is harder still to see the move as a victory, since the clear intention is for more people to be phased onto the already-less-generous universal benefit scheme (a scheme we ought expect to be rolled out with even greater haste, now that the Chancellor's figures depend on as many people using it as possible).  Overall, by 2020, with the Treasury projecting the cost of retaining the current tax credit structure to be minimal, we should anticipate that many are already on the UB scheme and subject to the same concerns about greater vulnerability to high levels of household debt outlined above.

Despite it being clear that the UK has now, and has had for some time, a chronic supply problem which has lead to ever higher house prices the Chancellor chose to try and close a demand gap by providing assistance to some buyers; it is difficult to see how this won't further support the already dysfunctional market rather than solve its underlying problems.

In addition, changes to housing benefit look set to remove approximately £1.5 billion from recipients whilst pilot schemes to allow for right-to-buy with housing association tenants can only serve to further reduce supply.  Many of the homes that are meant to be built (and many governments have made promises along these lines) will be well out of the reach of many families which urgently need the support that would have come from ever scarcer housing association and council supplies.

High house prices, reaching absurd levels before the crash, make a huge contribution to high levels of household debt.  Between the high cost of rent, or the need to take out a large mortgage worth many times their annual earnings households find themselves assuming more debt.  This leaves households poorly placed to deal with an economic downturn.

The spending review does not deliver economic security - it does nothing to address the long term challenges facing the UK economy and exacerbates many of the problems households face by reducing the support offered to them and leaving families to make up the difference.  In that sense it leaves the economy less resilient against the next downturn and more likely for there to be a steeper fall in tax revenue.

The Chancellor hopes that earnings will increase enough to compensate for the losses but as the Institute for Fiscal studies has been at pains to point out, that is arithmetically impossible.  The reverse on tax credits does not alter that one iota.

If the UK wants to truly enjoy economic security then it must deal with the housing and debt problems faced by its citizens.  If debt levels continue to rise then we ought to expect the next recession to last longer, be more severe, and be more likely to occur in the first place.